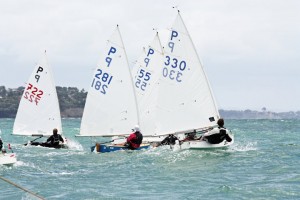 About the P Class

KYC is a strong supporter of the mighty P Class. We encourage sailors to experience this great piece of NZ sailing history at some stage of their sailing career. P Class sailing can be fitted into the Optimist sailing over a summer. Check in with the P Class Fleet Captain, scroll down to Fleet Captains on the contact list here.

From Wikipedia, the free encyclopedia

The P-Class is a type of small single sail dinghy, popular as a training boat for young people in New Zealand.

The P-Class was designed by New Zealander, Harry Highet, an engineer, as a simple vessel in which children and young people could learn to sail. It is a 2.13 metre long, single hull, single sail Bermuda rigged dinghy, and is designed to be sailed by one person. The bermudan rig took over from a gaff rig in the 1950s.

The first example appeared at Onerahi near Whangarei on New Year’s Day, 1920. However it was not until Highet and his family moved to Tauranga that the full potential of his design became apparent. Soon a fleet of a dozen or so boats were racing each weekend on Tauranga Harbour. The P-Class was initially known as the “Tauranga Class”. Boats carried the letter “P” on their sails, to indicate they were primary trainers.

By 1940, an Inter-Provincial Competition had been established for the P Class, but this was held only in 1940 and 1941, before lapsing for the rest of World War Two. The competition resumed in 1945, with sailors racing for the Tanner Cup, a trophy donated by Mr George Tanner. A separate Inter-Club competition for the Tauranga Cup began at about the same time. Both competitions are still held annually.

The P Class remains one of New Zealand’s most popular training dinghies.