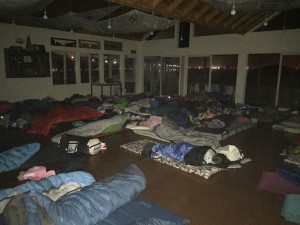 On November 1, 38 young sailors had a busy but fun weekend at KYC. Sailors started arriving from midday. The activities soon began with a walk down Kohimarama beach to pick up litter as part of the Department of Conservation “Conservation Week”. After putting the rubbish in the Kohi bins they moved onto a sand castle competition, thanks Fraser and Craig for being the impartial judges. Ella and her team then started the “Amazing Race – Kohi edition”. With clues under the beach, at sea, in the club house and many other places this game was challenging and fun. Once the ‘Race’ finished it was time to head out on the RHIBs for more action. With sea biscuits, banana biscuit and knee boards the kids had a heap of fun. Thanks Geoff, Sam and Jason for driving the RHIBs.

A great dinner was ready after the hot showers. Thanks to the galley team lead by Michael and Campbell for the great steak, sausages and salads. The group were too tired for the planned sailing quiz and went for the movie instead. The weary group eventually settled with a prowling Commodore looking for glowing screens causing distractions. Eventually the whispering stopped and peace descended. Another group of parents kept watch during the night on a roster. Thanks Tony, Michael, Adam, Sarah, Mark, Jason and Martin x3 for keeping an eye on things through the evening. 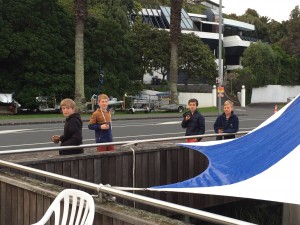 Morning saw an early start with kids having milo and breakfast. RHIBs were launched early with the mid-morning low tide. With the smell of bacon wafting from the club house the marathon runners started running past the club on their way to the turnaround at St Heliers. Congratulations to Felicity and Jacky for their efforts running a full marathon then turning up to the club after. Are cream buns the new marathon food, Jacky? The briefing took place as the mighty AB’s were teaching the Eagles how to play rugby in Chicago. The tired crews then all headed out for a Sunday sail. Tired but happy.

A big thanks to the parents and especially our older sailors who, without them the weekend wouldn’t have been possible; Ella, Chelsea, Libby, Charlotte, Tam, Scott, Eleanor and Matt. Based on feedback we will certainly give this a go again next year. It seems many new friendships were formed which was the primary aim of the event.