The first season for Kohimarama Yacht Club (KYC) was 1939/1940. Over the ensuing 75 years thousands of people have signed up and learnt to sail at KYC. The club is highly regarded in the local community as well as within New Zealand’s sailing fraternity. KYC has a proud history of assisting many individual sailors in their journey to achieve and excel at the highest levels of national and world competition. Not only have KYC members gone on to compete in ocean racing, Americas Cup and Olympic competition, but many have succeeded in developing careers in the maritime industry.

Many other young men and women have gone on to acquire a love of sailing and the sea. Whether they’ve graduated with the skill of tying knots or a passion for pottering about the Hauraki Gulf, they cherish the friendships made and the life skills learnt whilst at KYC.

As a youth club, Kohimarama Yacht Club is indebted to the dedicated parents and supporters who have contributed their time and resources over the decades. Thanks to their efforts, not only does KYC possess a wonderful history, but it boasts fine clubrooms and a grand array of support and coach boats.

The 75thanniversary Anniversary will be an occasion for all the past and present sailors, families and supporters to jointly celebrate being part of the KYC story. It will also be a time to share our visions for the future at KYC. 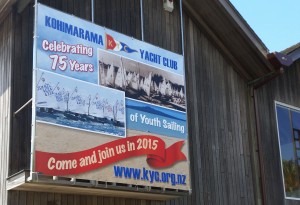